Colouring up January with a Hug 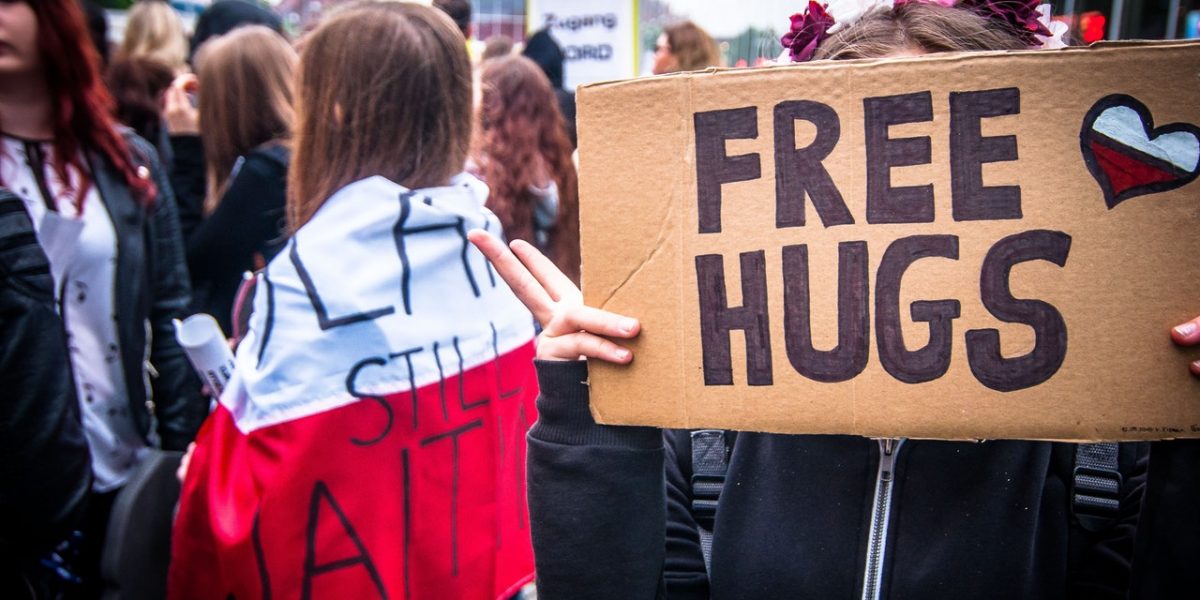 Strange opening title? A little. Let me explain…..19th January, or the third Monday in January has become known as Blue Monday. This is apparently as a result of a publicity campaign for a travel firm, Sky Travel, who wanted to increase holiday bookings at a crucial time of year. The actual science behind this day being labelled “the most depressing day of the year” is disputed. Despite this, the title has stuck and it is becoming a bit of an annual event in the press at a time of year when they are often searching for stories to fill their columns.

The science may be disputed but the factors that combine to make this time of year challenging are all there and for many they can combine to be the perfect storm of January Blues.

For some people the fact that the winter solstice was before Christmas and the nights are getting shorter is not enough. Those that find themselves affected by Seasonally Affected Disorder (SAD) find this to be a really difficult time of year and for them summer, sunshine and long days cannot come quickly enough since they have already experienced a sustained long, dark winter. Even if we do not have a disorder associated with winter, there is no doubt that going to work and arriving back home in darkness can be depressing in its own right.

The first week in January is known affectionately as “Divorce Week” by family law lawyers who see a marked increase in enquiries at this time of year. Reasons for this can be couples with children wanting to let their children enjoy Christmas before announcing plans to separate. Also marriages that are already on the rocks can fail to cope with the enormous expectations that the “season of goodwill to all” brings with it. Whatever the reasons by the third Monday in January, for many, consultations with lawyers are beginning to take place and the hard reality of divorce is beginning to sink in.

We do have this habit of using a special time of year associated with an ancient festival and some kind of feeling of renewal with setting challenging and stretching targets for ourselves. This often involves the really difficult process of undoing old habits and making new ones. Commitments made when drunk or when sitting virtually comatose as a result of excessive eating are hardly well considered, thought out decisions. They are more often emotional decisions taken on the spur of a moment with little chance of success.  If you get to the third weekend in January and are still on course to make significant behavioural changes then you are in the minority. One statistic quoted is that 88% of New Year’s Resolutions fail. Add in a few dark nights, the prospect of divorce with feeling like a failure….you would be depressed.

Have you noticed all the marketing around credit cards at this time of year? Especially the ones offering attractive rates on balance transfer? Again it’s well known for January to be one of the most indebted months of the year and with the highest likelihood of defaults on loan arrangements. Too much of the monthly salary invested into Christmas and the financial pain comes later. Around the third Monday in the month the credit card bills are hitting the mat. Whether you have the means to pay them or not, having to pay now for last month’s pleasure can often be an emotional hit.

Pay Day is still a week away

Even without facing credit card bills January is a tough month to navigate financially. The Christmas festivities lead to more celebrating and increased spending on socialising. It’s an expensive period which puts strain on the monthly income. For many there is an added pressure of the “benevolent” employer who thought it would be a nice gesture to pay staff early so that they could “afford” the Christmas presents. In actual fact all they have done is created a greater gap between pay days and that’s painful.

So there are a lot of us who are fed up with dark nights, struggling in our relationships, setting ourselves up to be failures, staring at hefty credit card bills and are still a week away from pay day on the 19th of January 2015…….and it is a Monday!!

That’s why it is awarded the accolade of being the most depressing day of the year.

We can’t take away these issues but we can at least help everyone help each other improve the physical and emotional environment within which they deal with these challenges.

For a long time Oxytocin, a hormone generated by our bodies has been identified as having the following properties:-

University of Vienna research in 2013 showed that these benefits are realised when holding close – hugging – someone who you trust. The opposite is true if you hug or are hugged by someone who you do not trust. Instead it increases levels of stress.

Here at Calm HQ we are feeling ambitious. We want to really make a difference. We are aiming to increase the amount of Oxytocin in the world for one day and that day is……Monday 19th January. By increasing the amount of oxytocin in the environment we will be doing our bit to combat what is potentially the most depressing day of the year.

How will we do this?

It’s simple really. We need to get hugging each other. We must give out cuddles, share a little squeeze and hug our oxytocin levels up to where they should be and beyond.

But!! Remember a hug with someone who you do not trust will increase your stress levels. So, be careful who you trust but be free with your hugs.

As we get closer to the date we will be releasing more information about how you can join in too. Electronic free hugs vouchers, photo sharing and nominations will all be part of it.

Please join us in making Monday 19th January one of the most tactile and enjoyable days of the year so far.

Calm People is taking a light hearted approach to highlight a serious subject, that being that we can all take simple steps to reduce the amount of stress in our  lives and improve our own emotional wellbeing.